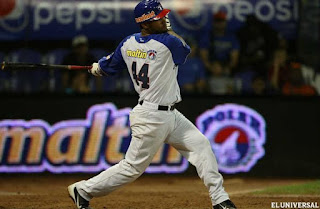 Jose Gonzalez (Springfield free agent-La Guaira) started at catcher and batted eighth.  2-for-4 with one double, one RBI, one run, one strikeout, and allowed one stolen base.

Ildemaro Vargas (former Palm Beach-Lara) started at second base and batted second.  2-for-5 with one double, one run, and assisted in one double play.

Alberto Rosario (Memphis free agent-Estrellas) started at catcher and batted eighth.  0-for-3 with one RBI and threw out one base runner.

Heath Wyatt (Memphis-Escogido) entered in the fifth and pitched to four batters.  He allowed three hits, one earned run, and struck one out.

Eugenio Velez (former Memphis-Azucareros) started in left field and batted third.  3-for-5 with one RBI, two runs, and one strikeout.

Gustavo Martinez (former GCL-Granada) entered in the seventh and pitched two batters.  He allowed one hit, one earned run, and one walk.

David Bergin (former Quad Cities-Boer) started in left field and batted fourth.  1-for-3 with one run and one walk.
Edgard Montiel (former DSL-Boer) started at third base and batted sixth.  2-for-4 with one strikeout.

Luis Mateo (former Memphis-Caguas) started at shortstop and batted ninth.  0-for-3 with one strikeout and one fielding error.

Anthony Garcia (Memphis-Carolina) started in right field and batted fourth.  1-for-3 with one RBI and one sac fly.
Felipe Lopez (former St. Louis-Carolina) started as designated hitter and batted fifth.  2-for-4 with two doubles and one run.
Pedro Echemendia (State College-Carolina) entered in the sixth and pitched to three batters.  He allowed two hits, one earned run, and one walk for the blown save (2).  (ir-s:2-2)
Juan Caballero (former Johnson City-Carolina) entered in the eighth and pitched one inning.  He allowed one hit and no runs.  (g/f:0-2)

Randy Ruiz (former MiLB signing-Mayaguez) started as designated hitter and batted fourth.  2-for-4 with one RBI, one run, and one strikeout.

Francisco Rivera (former Palm Beach-San Andres) started in left field and batted third.  2-for-5 with one RBI and one run.
Omar Javier (former Johnson City-San Andres) entered in the ninth and pitched one inning.  He allowed no hits or runs, and struck one out.  (g/f:1-1)

Panama has requested permission for Allen Cordoba (GCL) and Edmundo Sosa (Johnson City) play for the country's team: Panama American
Posted by jrocke217 at 10:51 AM