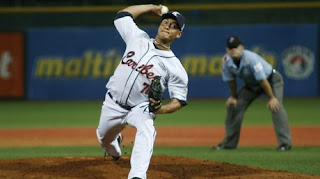 Ildemaro Vargas (former Palm Beach-Lara) started at second base and batted leadoff.  2-for-5 and assisted in one double play.

Alberto Rosario (Memphis free agent-Estrellas) started at catcher and batted ninth.  1-for-2 with one double, one two-out RBI, and one walk.

Jorge Sosa (former St. Louis-Escogido) entered in the 11th and pitched one inning.  He allowed one hit, one earned run, one home run, and struck one out for the losing decision (0-1).  (g/f:1-1)

Eugenio Velez (former Memphis-Azucareros) started in left field and batted second.  2-for-6 with one RBI.

David Bergin (former Quad Cities-Boer) started as designated hitter and batted sixth.  4-for-4 with one double.
Edgard Montiel (former DSL-Boer) entered late in the game at third base and batted leadoff.  1-for-2 with one RBI and one run.
Fidencio Flores (former GCL-Boer) entered in the eighth and pitched 1.1 innings.  He allowed five hits, six runs (five earned), two walks (one intentional), threw one wild pitch, and struck one out for the losing decision (3-4).  (g/f:0-1)

Hector Hernandez (former Palm Beach-Santurce) entered in the sixth and pitched one inning.  He allowed no hits or runs, two walks, and struck one out.  (g/f:0-2)

Anthony Garcia (Memphis-Carolina) started as designated hitter and batted third.  1-for-3 with one RBI and one walk.
Juan Caballero (former Johnson City-Carolina) entered in then second and pitched two innings.  He allowed two hits, four earned runs, one home run, three walks, threw one wild pitch, and struck one out for the losing decision (2-2).  (g/f:0-5)

Ruben Gotay (former Memphis-Mayaguez) started at third base and batted second.  1-for-3 at the plate.
Randy Ruiz (former MiLB signing-Mayaguez) started as designated hitter and batted fourth.  1-for-2 with one RBI and one sac fly.
Tyler Herron (former Springfield-Mayaguez) entered in the tenth and pitched to one batter.  He allowed one hit, one earned run, and one home run for the losing decision (5-2).

Jonathan Rivera (GCL-Metro) started in right field and batted fourth.  1-for-4 with one home run, two RBIs, one run, and one strikeout.

No Games Scheduled Until Saturday
Posted by jrocke217 at 1:48 PM