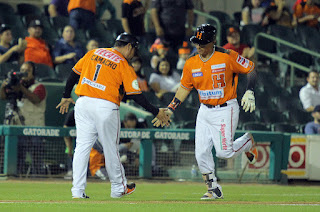 Notes:
The league has decided to cancel for 2017 due to damage of Hurricane Maria and will prepare for the 50th anniversary season in 2018: Primera Hora

Randy Arozarena (Springfield-Navojoa) started in left field and batted leadoff.  0-for-4 with one walk, one strikeout, and one outfield assist.

Maikel Cleto (former St. Louis-Mochis) entered in the ninth and pitched 2.2 innings.  He allowed three hits, one earned run, one intentional walk, threw two wild pitches, and struck one out for the losing decision (0-1).  (p-s:48-26)(g/f:5-0)

Cedric Hunter (former Memphis-Obregon) started in left field and batted fifth.  0-for-3 with one run, one walk, and one strikeout.

Rangel Ravelo (Memphis-Lara) started at first base and batted fourth.  One run and one walk.

Dennis Ortega (State College-Margarita) entered late in the game as designated hitter and batted seventh.  0-for-2 with one strikeout.

Ronny Cedeno (former St. Louis-Magallanes) started at third base and batted sixth.  0-for-3 with one ground into double play, and assisted in one double play.

Notes:
Hassan Pena (Somerset-Magallanes) was concerned he would not return: LVBP Official Site