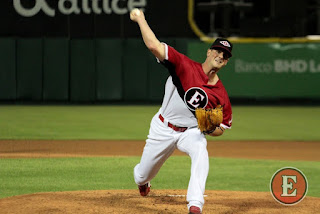 Peter Mooney (former 2010 draft selection-Salt River) started at shortstop and batted eighth.  0-for-3 with two runs, one walk, and one strikeout.

Efren Navarro (former Memphis-Hermosillo) started at first base and batted third.  2-for-5 with one double, two RBIs, two runs, and one strikeout.

Maikel Cleto (former St. Louis-Mochis) entered in the ninth and pitched to five batters.  He allowed three hits, four earned runs, one home run, one walk, and struck one out for the blown save (1) and losing decision (0-2).  (p-s:23-13)

Cedric Hunter (former Memphis-Obregon) started in left field and batted fifth.  1-for-3 with one walk

Kender Villegas (former Palm Beach-Margarita) entered in the sixth and pitched two innings.  He allowed one hit, no runs, and one walk.  (p-s:24-16)(g/f:2-3)

Rafael Ortega (former Memphis-Caribes) started in centerfield and batted sixth.  2-for-3 with one double, two runs, and one walk.
Cesar Valera (former Palm Beach-Caribes) started at second base and batted ninth.  1-for-2 with one sacrifice, one hit by pitch, and assisted in two double plays.

Wilfredo Tovar (Memphis-Caracas) started at shortstop and batted second.  2-for-4 with one double, one run, and one caught stealing.
Corey Baker (former Memphis-Caracas) entered in the fourth and pitched 1.2 innings.  He allowed no hits, one earned run, two walks, hit one batter, and struck two out.  (p-s:30-15)(g/f:3-0)

Ronny Cedeno (former St. Louis-Magallanes) started at third base and batted sixth.  2-for-4 with one run.

Jose 'Cafecito' Martinez (St. Louis-La Guaira) is feeling much better after ending the MLB season with a thumb injury and is set to make debut with La Guaira on November 15th: LVBP Official Site

Alberto Rosario (St. Louis-Estrellas) started at catcher and batted eighth.  1-for-3 with one strikeout and threw out one base runner.

Mike Mayers (Memphis-Escogido) started and pitched five innings.  He allowed no hits or runs, one walk, and struck nine out.  (g/f:7-1)

Eugenio Velez (former Memphis-Azucareros) started as designated hitter and batted fifth.  0-for-3 with one strikeout.
Magneuris Sierra (St. Louis-Azucareros) entered late in the game in left field and batted seventh.  He scored one run.
Jayson Aquino (former waiver claim-Azucareros) entered in the seventh and pitched one inning.  He allowed no hits or runs, and struck one out for the winning decision (1-1).  (g/f:1-1)