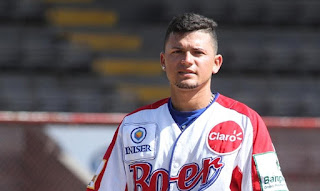 Charlie Tilson (former Memphis-Glendale) started in centerfield and batted leadoff.  0-for-4 with one RBI, one sac fly, and one strikeout.

Peter Mooney (former 2010 draft selection-Salt River) started at shortstop and batted eighth.  2-for-3 with one run and one hit by pitch.

Aramis Garcia (former 2011 draft selection-Scottsdale) started at catcher and batted sixth. 1-for-5 with one home run, two RBIs, one run, and two strikeouts.

Efren Navarro (former Memphis-Hermosillo) started at first base and batted third.  2-for-4 with two walks (one intentional).

Randy Aroareana (Srpingfield-Navojoa) started in centerfield and batted leadoff.  0-for-4 with one strikeout.
Niko Vasquez (former Springfield-Navojoa) entered late in the game at shortstop.

Cedric Hunter (former Memphis-Obregon) started in left field and batted fifth.  0-for-1 with one hit by pitch.

Pedro Echemendia (Memphis-La Guaira) entered in the eighth and pitched to three batters.  He allowed three hits, one earned run, and threw one wild pitch.  (p-s:11-7)

Wilfredo Tovar (Memphis-Caracas) started at shortstop and batted leadoff.  2-for-5 with two runs, one strikeout, and assisted in one double play.
Corey Baker (former Memphis-Caracas) entered in the fifth and pitched 2.1 innings.  He allowed no hits or runs, one walk, and struck one out for the winning decision (1-0). (p-s:31-21)(g/f:3-2)(ir-s:3-0)

Notes:
Rangel Ravelo (Memphis-Lara) could be out at least a week with discomfort in left quadriceps: Lara Official Site

Magneuris Sierra (St. Louis-Azucareros) entered late in the game in left field and batted eighth.  1-for-1 with one run.

Leon @ Chinandega was postponed due to rain

Fidencio Flores (former GCL-Boer) started and pitched 5.1 innings.  He allowed three hits, no runs, one walk, and struck four out for the winning decision (1-0).  (g/f:6-5)