Cardinals Winter League Notebook 10-30-17: Maikel Cleto Strikes Out One Over One Scoreless Innings For The Save; Pedro Echemendia Strikes Out Two Of Three Batters For The Hold; Updates On Tommy Pham, Nick Additon, Jose Martinez, & Roberto Canache 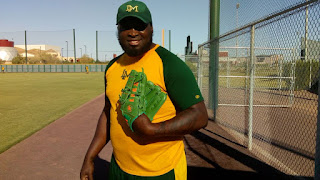 Efren Navarro (former Memphis-Hermosillo) started at first base and batted third.  1-for-3 with one walk and one unassisted double play.

Randy Arozarena (Springfield-Navojoa) started in centerfield and moved to left, batting leadoff.  1-for-4 with one double and one run.

Ronny Cedeno (former St. Louis-Magallanes) started at third base and batted fifth.  0-for-3 with one walk, one strikeout, and assisted in one double play.

Rafael Ortega (former Memphis-Caribes) started in centerfield and batted leadoff.  0-for-3 with one run, two walks, one caught stealing, and one outfield assist.
Cesar Valera (former Palm Beach-Caribes) entered late in the game at second base and batted eighth.  0-for-2 with one strikeout.
Nick Greenwood (former St. Louis-Caribes) started and pitched to eight batters.  He allowed six hits, five earned runs, and sturck one out for the losing decision (0-3).  (p-s:26-15)(g/f:1-0)

Kender Villegas (former Palm Beach-Margarita) entered in the fifth and pitched one inning.  He allowed four hits, one earned run, and stuck one out.  (p-s:24-14)(g/f:1-0)

Roberto Canache (former Johnson City-Caribes) is dealing with tendonitis is his right elbow and will miss a couple weeks: LVBP Official Site

Jose 'Cafecito' Martinez (St. Louis-La Guaira) could be activated in the next week by La Guiara: Meridiano

Notes:
The league has set April 1st as the opening day: El Vocero
Posted by jrocke217 at 9:56 AM