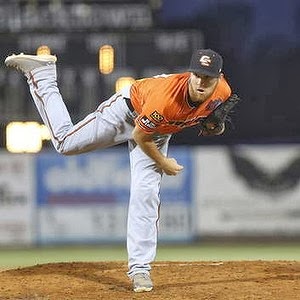 Wilfrido Pujols (former Johnson City-Palm Desert) started and first base and batted eighth.  0-for-2 with one strikeout and one error.

Mayaguez got a late start in travel after the government delayed their take off: Primera Hora

The sports media presented Hector Luna (former St. Louis-Chunichi-Aguilas) with a cake for his birthday: Yakyubaka
Posted by jrocke217 at 3:44 PM