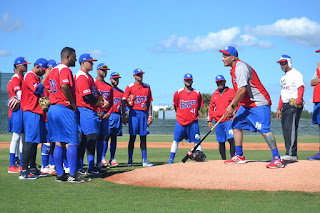 Charlie Tilson (former Memphis-Glendale) started in centerfield and batted leadoff.  0-for-4 with one strikeout.

Aramis Garcia (former 2011 draft selection-Scottsdale) started at catcher and batted second.  0-for-5 with one strikeout and grounded into one double play.

Edmundo Sosa (Palm Beach-Surprise) started at shortstop and batted second.  1-for-4 with one caught stealing/pickoff.
John Nogowski (Springfield-Surprise) started at first base and batted fifth.  0-for-4 with one strikeout, grounded into one double play, and assisted in two double plays.
Arturo Reyes (Memphis-Surprise) entered in the ninth and pitched one inning.  He allowed three hits, two earned runs, and threw one wild pitch.  (p-s:17-8)(g/f:1-1)

Ian Rice (former 2012 draft selection-Mesa) started at catcher and batted seventh.  1-for-2 with one RBI, one walk, one strikeout, allowed two stolen bases, and one pickoff error.

Efren Navarro (former Memphis-Hermosillo) started at first base and batted third.  1-for-3 with one RBI, one run, one walk, and assisted in one double play.

Niko Vasquez (former Springfield-Navojoa) entered late in the game as a pinch hitter and batted eighth.  1-for-1 at the plate.

Rafael Ortega (former Memphis-Caribes) started in centerfield and batted leadoff.  1-for-4 with three RBIs (two w/two-outs), two runs, one walk, and one strikeout.
Cesar Valera (former Palm Beach-Caribes) started at second base and batted leadoff.  1-for-5 with two strikeouts.
Nick Greenwood (former St. Louis-Caribes) entered in the seventh and pitched to one batter.  He allowed one hit and no runs.  (p-s:1-1)(ir-s:1-0)

Wilfredo Tovar (Memphis-Caracas) started at shortstop and batted second.  1-for-5 with one two-out RBI.

Rayder Ascenio (Palm Beach-Magallanes) entered late in the game at second base and batted second.  2-for-2 and assisted in one double play.

Magneuris Sierra (St. Louis-Azucareros) started in right field and moved to center, batting second.  0-for-3 with one walk, two strikeouts, one caught stealing, and one outfield assist.
Luis Cruz (former Memphis-Azucareros) entered late in the game at catcher and batted eighth.  0-for-1 with one run and one strikeout.
Eugenio Velez (former Memphis-Azucareros) entered late in the game at a pinch hitter and batted ninth.  0-for-1 at the plate.
Raul Valdes (former St. Louis-Azucareros) started and pitched six innings.  He allowed eight hits, five runs (two earned), one intentional walk, and struck four out for the losing decision (0-1).  (g/f:7-3)

Curt Smith (former Springfield-Chinandega) started in right field and batted fourth.  2-for-4 with one home run, one RBI, two runs, one walk, and one strikeout.

Notes:
The Nippon Professional League will not be sending players this season due to Hurricane Maria: Kyodo News
Posted by jrocke217 at 11:46 AM