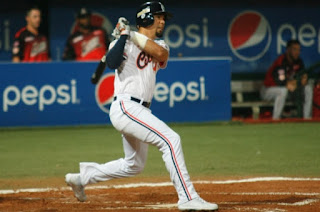 Zach Phillips (former Memphis-Culiacan) entered in the ninth and pitched to two batters.  He allowed one hit, two earned runs, one home run, and one walk.  (p-s:7-3)

Randy Arozarena (Springfield-Navojoa) started in centerfield and moved to left, batting leadoff.  1-for-3 with one caught stealing.

Cedric Hunter (former Memphis-Obregon) started as designated hitter and batted fourth.  2-for-4 with one double, one walk, and one strikeout.
Niko Vasquez (former Springfield-Obregon) entered late in the game at shortstop and batted ninth.  One walk at the plate.

Efren Navarro (former Memphis-Hermosillo) started in left field and moved to first base, batting third.  1-for-3 with one run, two walks, one strikeout, grounded into one double play, and one outfield assist.

Rangel Ravelo (Memphis-Lara) started at first base and batted third.  0-for-2 with one RBI, one run, one intentional walk, one sac fly, one hit by pitch, grounded into one double play.

Ronny Cedeno (former St. Louis-Magallanes) started at shortstop and batted second.  1-for-3 with one stolen base and assisted in one double play.
Rayder Ascanio (Palm Beach-Magallanes) entered late in the game at shortstop and batted second.  0-for-1 at the plate.
Jose Martinez (former Springfield-Magallanes) entered late in the game as a pinch hitter and batted fifth.  0-for-1 at the plate.
Jerome Williams (former St. Louis-Magallanes) started and pitched 4.1 innings.  He allowed six hits, five earned runs, one home run, one intentional walk, and hit one batter for the losing decision (1-2).  (p-s:28-23)(g/f:9-4)

Jose Martinez (St. Louis-La Guaira) started at first base and batted third.  1-for-2 with one run and two walks.

Wilfredo Tovar (Memphis-Caracas) started at shortstop and batted second.  1-for-5 with one strikeout and assisted in two double plays.
Corey Baker (former Memphis-Caracas) entered in the eighth and pitched one inning.  He allowed one hit, two earned runs, one home run, one walk, and struck two out for the blown save (1).  (p-s:22-12)(g/f:1-0)

Jose Gomez (former Johnson City-La Guaira) entered in the sixth and pitched two two batters.  He allowed no hits or runs, and struck one out.