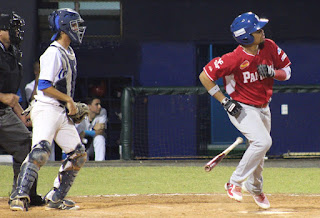 Josh Zeid (Memphis free agent-Jalisco) entered in the eighth and pitched to five batters.  He allowed two hits, three earned runs, one walk, threw one wild pitch, and struck two out for the blown save (1) and losing decision (1-1).  (p-s:18-12)

Randy Arozarena (Springfield-Navojoa) started in centerfield and moved to left, batting leadoff.  0-for-4 with two strikeouts.

Breyvic Valera (St. Louis-Margarita) started at second base and batted second.  2-for-5 with one RBI and assisted in three double plays.
Imeldo Diaz (Johnson City-Margarita) started at third base and batted sixth.  1-for-5 with one two-out RBI, one strikeout, one fielding error, and assisted in one double play.
Kender Villegas (former Palm Beach-Margarita) entered in the fifth and pitched 1.1 innings.  He allowed no hits or runs, one walk, and struck one out.  (p-s:18-9)(g/f:2-0)(ir-s:2-0)

Anthony Garcia (Memphis free agent-Caracas) started in left field and batted eighth.  0-for-3 with one strikeout.
Wilfredo Tovar (Memphis-Caracas) started at shortstop and batted ninth.  0-for-2 with one run, one walk, and one strikeout.
Miguel Socolovich (St. Louis free agent-Caracas) entered in the seventh and pitched two innings.  He allowed no hits or runs, and struck two out.  (p-s:26-20)(g/f:2-1)

Alberto Rosario (St. Louis free agent-Estrellas) started at catcher and batted ninth.  1-for-3 with one double, one two-out RBI, one passed ball, and threw out one base runner.
Evan MacLane (former St. Louis-Estrellas) started and pitched 2.2 innings. He allowed six hits, no runs, and one walk.  (g/f:5-1)

Eliezer Alvarez (former Springfield-Escogido) entered late in the game as a pinch hitter and batted leadoff.  0-for-1 at the plate.
Nick Additon (former Memphis-Escogido) started and pitched 2.2 innings.  He allowed six hits, four runs (one earned), one walk, struck two out, and picked one runner off.  (g/f:4-1)