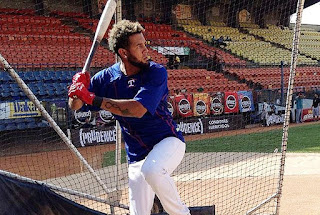 Randy Arozarena (Springfield-Navojoa) started in centerfield and batted leadoff.  0-for-3 with one walk and three strikeouts.

Efren Navarro (former Memphis-Hermosillo) started at first base and batted third.  2-for-5 with one double, one RBI, two runs, two strikeouts, and assisted in one double play.

Dennis Ortega (State College-Margarita) started at catcher and batted seventh.  0-for-4 with one RBI, one strikeout, and picked one runner off.
Kender Villegas (former Palm Beach-Margarita) entered in the fourth and pitched two innings.  He allowed no hits or runs, and struck one out.  (p-s:18-14)(g/f:3-1)(ir-s:3-2)

Jose Martinez (St. Louis-La Guaira) started at first base and batted fourth.  3-for-4 with two RBIs, two runs, and assisted in one double play.

Wilfredo Tovar (Memphis-Caracas) started at second base and batted second.  4-for-5 with two runs and one fielding error.
Corey Baker (former Memphis-Caracas) entered in the sixth and pitched one inning.  He allowed no hits or runs, threw one wild pitch, and struck three out for the hold (3).  (p-s:20-13)(g/f:2-0)

Rayder Ascanio (Palm Beach-Magallanes) started ar second base and batted second.  0-for-2 with two runs, two walks, one sacrifice, and one strikeout.
Pedro Rodriguez (former MiLB signing-Magallanes) entered in the eighth and pitched to one batter.  He allowed no hits or runs, and one walk.  (p-s:4-0)(ir-s:1-0)

Notes:
Rangel Ravelo (Memphis-Lara) practiced with Lara on Wednesday and is ready to play after dealing with left quad discomfort: Lara Official Site

Notes:
Puerto Rican players are privileged to have Yadier Molina (St. Louis-Puerto Rican MGR) to have him as  manager: El Vocero