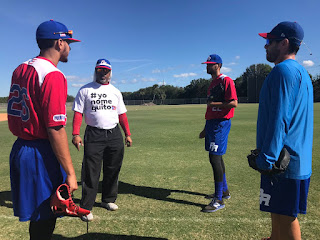 Oscar Mercado (Springfield-Surprise) started in centerfield and batted leadoff.  1-for-5 with one strikeout and grounded into one double play.
Andrew Knizner (Springfield-Surprise) started at first base and batted fourth.  0-for-3 with one walk, one strikeout, grounded into one double play, and assisted in two double plays.
Josh Lucas (St. Louis-Surprise) entered in the ninth and pitched one inning.  He allowed two hits, two earned runs, one home run, and struck two out.  (p-s:15-13)

Efren Navarro (former Memphis-Hermosillo) started at first base and batted second.  2-for-5 with two runs, one walk, and grounded into one double play.

Cedric Hunter (former Memphis-Obregon) entered late in the game in centerfield and batted ninth.  1-for-2 with one run.

Pedro Echemendia (Memphis-La Guaira) entered in the eighth and pitched one inning.  He allowed two hits, one earned run, and struck one out.  (p-s:13-8)(g/f:2-0)

Wilfredo Tovar (Memphis-Caracas) started at shortstop and batted eighth.  0-for-3 with one walk and assisted in two double plays.

Dennis Ortega (State College-Margarita) started at catcher and batted eighth.  1-for-3 with one two-out RBI and one caught stealing.

Jermaine Curtis (former St. Louis-Zulia) expected to join Zulia in the second half of the season: El Emergente

Imeldo Diaz (State College-Margarita/Aragua) started at shortstop and batted seventh.  1-for-5 with one triple, one RBI, and one run.

Magneuris Sierra (St. Louis-Azucareros) entered late in the game in left field and batted fourth.  0-for-1 with one run.
Eugenio Velez (former Memphis-Azucareros) started in left field and batted sixth.  1-for-3 with one RBI, one run, one sacrifice, and in strikeout.
Jayson Aquino (former waiver claim-Azuararos) entered fifth and pitched to two batters.  He allowed no hits or runs.  (g/f:2-0)(ir-s:3-2)

Curt Smith (former Springfield-Chinandega) started as designated hitter and batted fourth.  0-for-3 with one walk.