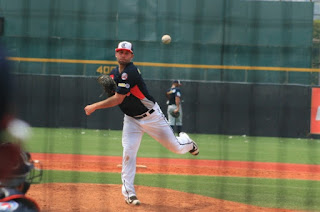 Oscar Mercado (Springfield-Surprise) started in centerfield and batted third.  0-for-2 with one RBI, one run, three walks, two strikeouts, and one outfield assist.
Edmundo Sosa (Palm Beach-Surprise) started at third base and batted eighth.  1-for-2 with one two-out RBI, one run, one run, and one fielding error.
Jordan Hicks (Palm Beach-Surprise) entered in the eighth and pitched one inning.  He allowed one hit, no runs, and struck two out.  (p-s:19-13)(g/f:1-0)
Arturo Reyes (Memphis-Surprise) entered in the ninth and pitched one inning.  He allowed two hits, one earned run, threw one wild pitch, and struck one out.  (p-s:11-9)(g/f:1-0)

Peter Mooney (former 2010 draft selection-Salt River) started at shortstop and batted ninth.  0-for-3 with one ground into double play.

Randy Arozarena (Springfield-Navojoa) started in centerfield and batted leadoff.  1-for-5 with one run, one strikeout, and grounded into one double play.

Efren Navarro (former Memphis-Hermosillo) started at first base and batted third.  1-for-5 with one RBI, two strikeouts, and assisted in one double play.

Ronny Cedeno (former St. Louis-Magallanes) started at shortstop and batted second.  4-for-5 with one double and three runs.

Wilfredo Tovar (Memphis-Caracas) started at second base and moved to shortstop, batting second.  1-for-4 with one triple, two two-out RBIs, one run, one walk, and three strikeouts.

Eduardo Sanchez (former St. Louis-Margarita/Aragua) entered in the seventh and pitched one inning.  He allowed two hits, two runs (one earned), one walk, and threw one wild pitch.