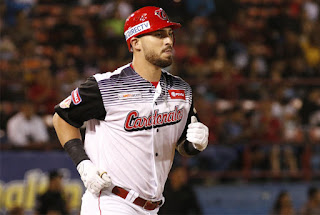 Niko Vasquez (former Springfield-Obregon) started at shortstop and batted seventh.  0-for-3 and assisted in one double play.

Allen Cordoba (former Johnson City-Hermosillo) started in left field and batted fifth.  1-for-3 with one double, one run, one walk, and two strikeouts.
Efren Navarro (former Memphis-Hermosillo) entered late in the game as a pinch hitter and batted ninth.  One walk at the plate.

Randy Arozarena (Springfield-Navojoa) started in left field and batted leadoff.  2-for-4 with one run and one hit by pitch.

Ronny Cedeno (former St. Louis-Magallanes) started at shortstop and batted fifth.  3-for-5 with one two-out RBI, one run, one strikeout, and assisted in two double plays.
Pedro Rodriguez (former MiLB signing-Magallanes) entered in the seventh and pitched 1.1 innings.  He allowed one hit and no runs for the hold (4).  (p-s:15-9)(g/f:2-1)(ir-s:2-0)

Rafael Ortega (former Memphis-Caribes) started in centerfield and batted leadoff. 0-for-4 with one strikeout.

Audry Perez (former St. Louis-Estrellas) started at catcher and batted ninth.  1-for-3 with one two-out RBI, one hit by pitch, one strikeout, and one throwing error.