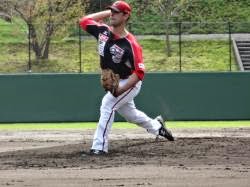 Boone Whiting (Memphis-Caracas) was named starter for game two for of the season: Lider

Penalties were announced for any violence in the LVBP by players: Lider

The series that puts the championship teams from the Australian Baseball League, Chinese Professional League, Nippon Professional Baseball, and Korean Baseball Organization in a tournament against each other, has been cancelled this winter: ABL Official Site