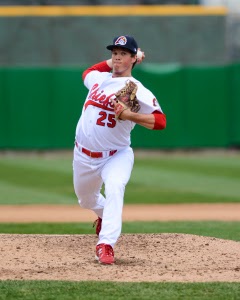 
Making the move from the starting rotation to reliever, was a transition Chris Perry made look too easy.  The 24-year old right-handed was selected in the 17th round of the 2012 amateur draft out of Methodist College and spent his first season pitching in the rotations for short-season Single-A State College and Single-A Peoria.  He posted a 4-4 record, 3.18 ERA, while striking out 55 and walking 20 over 70.2 innings in 13 starts.

Perry was shifted into the bullpen in his second professional season seeing solid results throughout the summer.  He struck out a total of 98 and walked 21 over 63 innings, splitting time at Peoria and A-Advanced Palm Beach.  The North Carolina native filled in a closer at times and also earned the St. Louis Cardinals May 2014 Pitcher of the Month honor.

The Cardinals sent eight minor leaguers to the Arizona Fall League the offseason including Chris Perry.  Chris was kind enough to share some of his experience with the fans here at 'Cardinals Winter League.'

I have never felt as important as I did after this past season of 2014 playing high a/low a baseball. I dominated, only made several bad pitches, got sent to the Arizona fall league.

I am now going into my 4th appearance out of the bullpen in the Arizona fall league. First thing I have learned is that big leaguers and future big leaguers are good. Hitters see the ball out of the hand better than I have ever seen, in Arizona. I used to live and still do succeed on deception. Now I am not as deceptive. Guys see balls and hit pitches in the zone better than I have ever seen.

Being unsuccessful in baseball is frustrating, but I have recently begun to realize I am facing big league hitters in a big league strike zone. The experience has given me an exponential learning curve. Ending the year as a high A pitcher, playing at this level has shown me what it takes to play at the highest level. And regardless of my performance I have gained so much experience headed into next years spring training. Now I know how the higher levels perform and have an entire offseason to develop my skills to be able pitch at the high level I have experienced in the Arizona fall league.
Posted by jrocke217 at 10:30 AM