Cardinals Winter League Notebook 12-1-14: Xavier Scruggs Collects Two Singles, One Walk, & One RBI; Miguel Socolovich Strikes Out One Over One Scoreless Inning For The Hold; Jhonny Polanco Has High Goals For 2015 Despite Winter Struggles 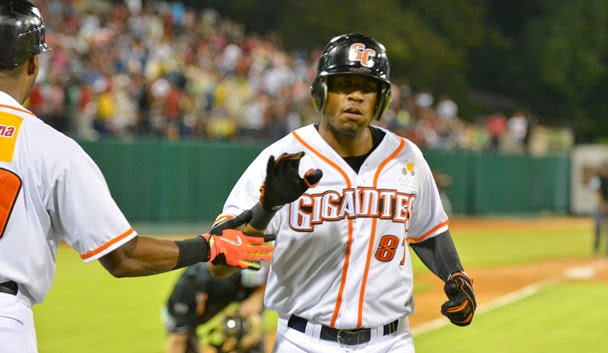 Renyel Pinto (former Memphis-La Guaira) entered in the eighth and pitched one inning.  He allowed no hits or runs, and struck one out.  (g/f:2-0)

Jose Martinez (former Springfield-Aragua) started at third base and batted fourth.  0-for-4 with one walk.
Jorge Rondon (former St. Louis-Aragua) entered in the ninth and pitched to one batter.  He allowed one hit and no runs.

Breyvic Valera (Springfield-Margarita) started at second base and moved centerfield, batting leadoff.  1-for-3 with one run, one walk, one stolen base, one strikeout, one caught stealing, one fielding error, and assisted in three double plays.
David Peralta (former Johnson City-Margarita) started as designated hitter and batted third.  1-for-4 with one run.
Luis Perdomo (former Springfield-Margarita) entered in the sixth and pitched one inning.  He allowed one hit, no runs, one walk, threw one wild pitch, and struck one out for the hold (1).  (g/f:0-1)

Nov. 29:
Carlos Torres (Johnson City-Margarita) started in left field and batted seventh.  2-for-3 with one double.

Justin Christian (former Memphis-Mochis) started in centerfield and batted leadoff.  2-for-5 with one two-out RBI.

Xavier Scruggs (St. Louis-Cibao) started at first base and batted seventh.  2-for-4 with one RBI, two runs, one walk, and assisted in one double play.

Omar Javier (former Johnson City-Estrellas) entered in the ninth and pitched to one batter.  He allowed no hits or runs, and struck one out.  (ir-s:3-0)

Eugenio Velez (former Memphis-Azucareros) started in left field and batted leadoff.  3-for-5 with one home run, three two-out RBIs, one run, and one caught stealing.

Edgard Montiel (former DSL-Chinandega) started at first base and batted sixth.  1-for-4 with one RBI.

Notes:
Jhonny Polanco (Peoria-Boer) can hit between 95-98 mph and hopes to rise up the St. Louis system in 2015: La Prena

Luis Mateo (Memphis free agent-Caguas) started at shortstop and batted ninth.  0-for-4 with one strikeout and one caught stealing.

Ruben Gotay (former Memphis-San Juan) started at second base and moved to third, batting third.  1-for-3 with two walks (one intentional) and two strikeouts.

Hanshin is open to reworking their offer to Hiroyuki Nakajima (Oakland free agent) and Chiba Lotte has made a two-year offer to Cuban Alfredo Despaigne: Yakyubaka
Posted by jrocke217 at 10:45 AM