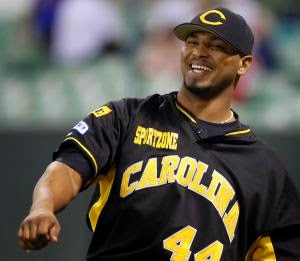 David Peralta (former Johnson City-Margarita) has decided to keep playing into the postseason, while Breyvic Valera (Springfield-Margarita) will not: El Universal

Notes:
Hermosillo placed Shaun Garceau (former Springfield) on the inactive list and could be released on January 2 if not activated: LMP Official Site

Jonathan Rodriguez (Memphis-Santurce) started at first base and batted eighth.  1-for-2 with one double, one RBI, one run, and one sac fly.
Joel Pineiro (former St. Louis-Santurce) started and pitched 5.1 innings.  He allowed four hits, one earned run, one home run, one walk, hit one batter, and struck two out for the winning decision (2-4).  (g/f:4-8)
Pedro Feliciano (former Memphis-Santurce) entered in the sixth and pitched to three batters.  He allowed one hit, no runs, and one walk.  (g/f:0-1)(ir-s:1-0)

Ruben Gotay (former Memphis-San Juan) started at third base and batted fifth.  0-for-2 with one walk.

Santurce beat San Juan 3-1 in game one of doubleheader

Luis Montanez (former Memphis-Mayaguez) started in right field and batted seventh.  1-for-3 with one RBI and one hit by pitch.
Randy Ruiz (former MiLB signing-Mayaguez) entered late in the game as a pinch hitter and batted ninth.  0-for-1 with one strikeout.
Tyler Herron (former Springfield-Mayaguez) entered in the sixth and pitched one inning.  He allowed no hits or runs, and struck one out for the hold (1).  (g/f:0-2)

Anthony Garica (Palm Beach-Carolina) started as designated hitter and batted fourth.  1-for-4 with one double and one strikeout.

Oneli Perez (former Memphis-La Cuenca) entered in the ninth and pitched one inning.  He allowed three hits and no runs for the save.  (g/f:0-3)

Ryde Rodriguez (former Palm Beach-Acayucan) started in left field and batted fifth.  0-for-3 with one run and two walks.
Ivan Bellazetin (former MiLB tryout-Acayucan) started at second base and moved to shortstop, batting ninth.  3-for-4 with one home run, three RBIs, two runs, one hit by pitch, and one strikeout.

Allen Cordoba (DSL-Urraca) started at third base and batted eighth.  0-for-5 with three strikeouts.

Notes:
Cuba has been give the go to play, they just need to get visas: Primera Hora

Cuba is looking for ways to stop their top players from escaping the country: El Nuevo Herald

Chihiro Kaneko re-signed with Orix: Yakyubaka
Posted by jrocke217 at 10:30 AM