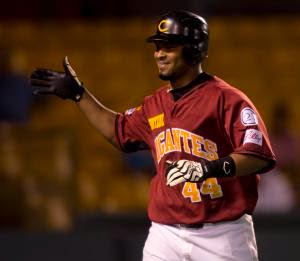 Jose Martinez (former Springfield-Aragua) started at third base and moved to second, batting third.  2-for-5 with one double, one home run, two RBIs (one w/two-outs), one run, and assisted in three double plays.

Pedro Rodriguez (former MiLB signing-Caribes) entered in the ninth and pitched 1.1 innings.  He allowed one hit, no runs, one intentional walk, hit one batter, and struck one out for the winning decision (1-0).  (g/f:2-1)

Ronny Cedeno (former St. Louis-Magallanes) started at shortstop and batted second.  1-for-5 with one walk and assisted in one double play.

Notes:
Freddy Garcia (EDA Rhinos free agent-Aragua) will be used in relief to get warmed up and be inserted into the rotation: Lider

Daniel Osterbrock (Lancaster) has signed on to pitch for Lara: Lider

Javier Avendano (former Batavia-Aragua) entered in the seventh and pitched one inning.  He allowed no hits or runs, and struck one out.

Russell Branyan (former St. Louis-Culiacan) started as designated hitter and batted fourth.  1-for-2 with one two-out RBI and three walks.

Hugo Castellanos (former Memphis-Jalisco) entered in the ninth and pitched one inning.  He allowed no hits or runs, one walk, and struck one out.  (p-s:14-7)(g/f:2-0)

Justin Christian (former Memphis-Mochis) started in centerfield and batted leadoff.  0-for-5 at the plate.

Joe Thurston (former St. Louis-Licey) started at second base and batted ninth.  0-for-3 with one strikeout and assisted in one double play.

Eugenio Velez (former Memphis-Azucareros) started in right field and batted third.  1-for-3 with one walk and one outfield assist.
Brad Penny (former St. Louis-Azucareros) started and pitched 3.1 innings.  He allowed six hits, four earned runs, hit one batter, and struck one out.  (g/f:4-1)

Shairon Martis (Uni-President) has signed on to pitch for Estrellas: Estrellas Official Site

Jhonny Polanco (Peoria-Boer) entered in the seventh and pitched to seven batters.  He allowed one hit, two earned runs, two walks, and struck one out.  (g/f:1-0)(ir-s:1-1)

Ruben Gotay (former Memphis-San Juan) entered late in the game as a pinch hitter and took over at second base, batting ninth.  0-for-2 at the plate.

Notes:
The trade between San Juan and Santurce, which included Ruben Gotay (former Memphis) and Jonathan Rodriguez (Memphis), was rejected by the league and both teams have filed a grievance: El Nuevo Dia

Donovan Solano (former Memphis-Barranquilla) was in attendance for the Barranquilla 2-1 victory over Cartagena: El Heraldo

Jose Calero (former GCL-Sincelejo) and Ronald Ramirez (former Palm beach-Cartagena) were named to the All-Star team.  Ozzie Guillen and Ivan Rodriguez will be on hand for the game: El Universal