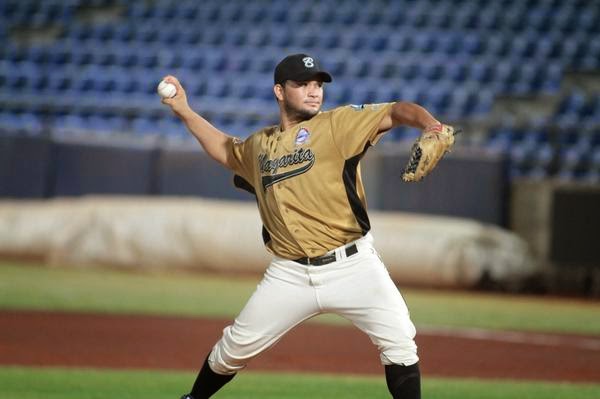 Jose Martinez (former Springfield-Aragua) started at second base and batted fourth.  2-for-4 with two RBIs (one w/two-outs), one walk, and one caught stealing.

Cesar Izturis (former St. Louis-Lara) started at second base and batted second.  1-for-4 and assisted in one double play.

Pedro Rodriguez (former MiLB signing-Caribes) entered in the ninth and pitched one inning.  He allowed no hits or runs, and struck one out for the save (9).  (p-s:11-8)(g/f:2-0)

Justin Christian (former Memphis-Mochis) started in left field and batted sixth.  2-for-4 with two doubles and one run.

Russell Branyan (former St. Louis-Culiacan) started as designated hitter and batted fourth.  1-for-3 with one double and two strikeouts.

Francisco Samuel (former Memphis-Escogido) entered in the eighth and pitched one inning.  He allowed no hits or runs, two walks, and struck one out for the hold (1).  (g/f:1-1)

Edgard Montiel (former DSL-Chinandega) started at first base and batted eighth.  0-for-3 with one strikeout.

Luis Mateo (Memphis free agent-Caguas) started at shortstop and batted ninth.  0-for-3 with one strikeout.

Ruben Gotay (former Springfield-San Juan) started at third base and batted fifth.  0-for-4 with one strikeout.
Pete Parise (former Memphis-San Juan) entered in the seventh and pitched one inning.  He allowed no hits, one earned run, and two walks.  (g/f:1-1)

Jonathan Rodriguez (Memphis-Santurce) started at first base and moved to right field, batting eighth.  1-for-2 with one double, one walk, and one strikeout.

Ivan Bellazetin (former MiLB tryout-Acayucan) started at second base and batted ninth.  1-for-2 with one run and one walk.
Juan Pena (former Tennessee-Acayucan) started and pitched 2.1 innings.  He allowed four hits, five runs (four earned), four walks, threw one wild pitch, and struck three out for the losing decision.  (g/f:4-1)

Amaury Cazana (former Memphis-Paso de Ovejas) started in right field and batted fourth.  3-for-5 with two doubles and one run.

Allen Cordoba (DSL-Urraca) entered late in the game at shortstop and batted second.  0-for-1 at the plate.

Hanshin may offer a four-year deal to Chihiro Kaneko (Orix free agent) and Chiba Lotte may be interested in Seung-Hwan Oh after his contract is up with Hanshin:Yakyubaka
Posted by jrocke217 at 10:10 AM