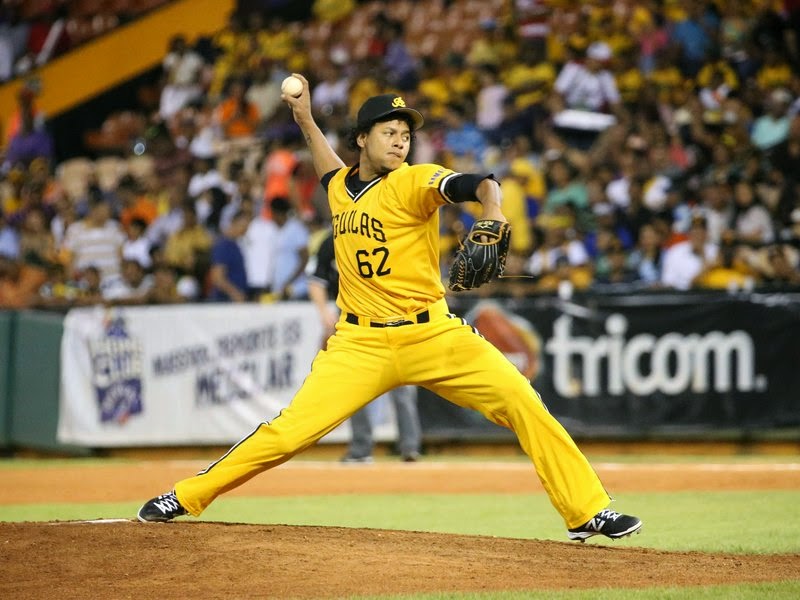 Renyel Pinto (former Memphis-La Guiara) entered in the sixth and pitched to three batters.  He allowed two hits and no runs.  (p-s:16-9)

Jose Martinez (former Springfield-Aragua) started at third base and moved to left field, batting fourth.  2-for-5 with one RBI and one run.

Breyvic Valera (Springfield-Margarita) started at second base and batted leadoff.  2-for-4 with two two-out RBIs, three runs, one walk, and assisted in one double play.
David Peralta (former Johnson City-Margarita) started in right field and batted third.  2-for-4 with two doubles, five two-out RBIs, and one run.
Eliezer Alfonso (former Peoria-Margarita) started first base and batted sixth.  1-for-3 with two runs and one hit by pitch.
Luis Perdomo (former Springfield-Margarita) entered in the sixth and pitched one inning.  He allowed two hits, one earned run, and one walk.  (g/f:3-0)
Geuddy Guerra (former VSL-Margarita) entered in the eighth and pitched one inning.  He allowed two hits, two earned runs, one walk, and struck one out.  (g/f:1-0)

Ronny Cedeno (former St. Louis-Magallanes) started at shortstop and batted second.  1-for-3 with one RBI and one strikeout.
Daniel McCutchen (former 2005 draft selection-Magallanes) started and pitched 1.1 innings.  He allowed five hits, five earned runs, one walk, and one hit by pitch for the losing decision (0-1).  (g/f:1-0)

Russell Branyan (former St. Louis-Culiacan) started as designated hitter and batted fourth.  1-for-2 with one double, one two-out RBI, one run, and one hit by pitch.

Justin Chrtistian (former Memphis-Mochis) started in centerfield and batted leadoff.  0-for-3 with one run, one walk, and one strikeout.
Alberto Castillo (former MiLB signing-Mochis) started and pitched six innings.  He allowed one hit, no runs, one walk, hit one batter, threw two wild pitches, one balk, and struck eight out for the winning decision (3-1).  (p-s:89-59)(g/f:7-2)

Mochis beat Navojoa 8-0 in game one of doubleheader

Justin Christian (former Memphis-Mochis) stated in centerfield and batted leadoff.  2-for-3 with one run, one walk, one stolen base, and one strikeout.

Eugenio Velez (former Memphis-Azucareros) started in right field and moved to left, batting third.  0-for-3 with one walk and one sacrifice.

Chiba Lotte (NPB) has come to terms with Alfredo Despaigne for the 2015 season: Yakyubaka

Talks between Hanwha (KBO) and Felix Pie broke down and the team is searching for another foreign bat: Yonhap News Agency

Yang Hyeon-Jong will spend another season with Kia (KBO) and try for the MLB next winter: Yonhap News Agency
Posted by jrocke217 at 10:15 AM