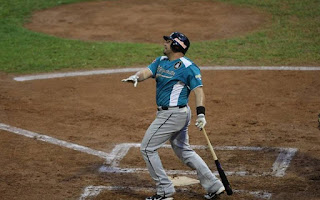 Hector Luna (former St. Louis-Hiroshima) injured his shoulder when he tripped while running to first base on a grounder: Yakyubaka

Cesar Valera (former Palm Beach-Caribes) started at shortstop and batted ninth.  0-for-3 with one strikeout and assisted in one double play.

Cedric Hunter (former Memphis-Lara) started in right field and batted sixth.  0-for-4 with one intentional walk and two strikeouts.

Ildemaro Vargas (former Palm Beach-Lara) returned to the states for personal reasons and is expected back on Thursday: El Emergente

Aramis Garcia (former 2011 draft selection-Scottsdale) started at catcher and batted sixth.  0-for-1 with one RBI, one walk, and allowed two stolen bases.

Luis Garcia (former New Haven-Hermosillo) started at first base and batted sixth.  0-for-3 with one strikeout.

Randy Arozarena (MiLB signing-Navojoa) started in centerfield and batted second.  1-for-3 with one sacrifice.
Kyle Grana (Palm Beach-Navojoa) entered in the ninth and pitched one inning.  He allowed one hit, one earned run, two walks, and struck two out for the save (1).  (p-s:24-13)(g/f:1-0)

Jonathan Rivera (Johnson City-Metropolitanas) is confirmed to be playing for Metro during the 2016-17 season: Metro Facebook

Donovan Solano (former Memphis-Barranquilla) and Ronald Ramirez (former Palm Beach-Cartagena) are included on the roster for Colombian when they take on the Dominican Republic: El Universal
Posted by jrocke217 at 10:39 AM