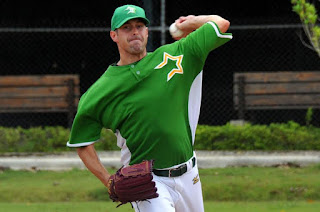 Ildemaro Vargas (former Palm Beach-Lara) started at second base and batted second.  0-for-3 with one walk and one strikeout.
Cedric Hunter (former Memphis-Lara) started in centerfield and moved to right, batting eighth.  1-for-4 with one double, one run, one strikeout, and one caught stealing.

Ronny Cedeno (former MLB signing-Magallanes) started at shortstop and batted second.  4-for-5 with one double, one RBI, one run, one stolen base, and assisted in three double plays.

Jose Martinez (St. Louis-La Guaira) started in right field and batted fifth.  1-for-4 with one two-out RBI and one outfield assist.
Pedro Echemendia (Memphis-La Guaira) entered in the seventh and pitched one inning.  He allowed no hits or runs for the hold (2).  (p-s:7-4)(g/f:1-1)(ir-s:1-0)

Notes:
Cesar Izturis (former St. Louis-Lara) will take over as Lara first base coach for a short period of time: Lara Official Site

Harrison Bader (Springfield-Glendale) started in centerfield and batted fourth.  1-for-3 with one run and one walk.

Aramis Garcia (former 2011 draft selection-Scottsdale) started at catcher and batted seventh.  2-for-4 with one RBI and threw out one base runner.

Efren Navarro (Memphis-Hermosillo) started in left field and moved to first base, batting fourth.  1-for-4 with one strikeout and one outfield assist.

Iker Franco (former Springfield-Culiacan) started at catcher and batted eighth.  2-for-3 with one double, one home run, one two-out RBI, one run, and one strikeout.

Randy Arozarena (MiLB signing-Navojoa) started in centerfield and batted second.  1-for-4 with one sacrifice, one stolen base, and one strikeout.

Eugenio Velez (former Memphis-Azucareros) started in left field and batted leadoff.  3-for-5 with one triple, one RBI, and one run.

Eliezer Alvarez (Peoria-Escogido) entered late in the game at second base and batted third.  0-for-1 with one strikeout, one throwing error, and assisted in one double play.

Tony Cruz (former St. Louis-Licey) started at catcher and batted seventh.  0-for-3 with one run, one walk, one strikeout, and allowed one stolen base.

Notes:
D'Angelo Jimenez (former Memphis-Licey) talks about the differences in hitting in the U.S. and Dominican: Licey Official Site

So Taguchi (former St. Louis-Orix) is returning as manager for Orix minor league team in 2017: Yakyubaka
Posted by jrocke217 at 10:52 AM