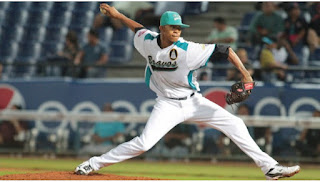 Cesar Valera (former Palm Beach-Caribes) started at shortstop and batted ninth.  0-for-2 with one run, one walk, one strikeout, and one throwing error.
David Oca (Johnson City-Caribes) entered in the seventh and pitched to two batters.  He allowed two hits and two earned runs for the blown save (1) and losing decision (0-1).  (p-s:8-4)

Ildemaro Vargas (former Palm Beach-Lara) started at second base and batted seventh.  2-for-4 with one double.

Breyvic Valera (Memphis-Margarita) started in centerfield and moved to left, batting sixth.  1-for-4 with two strikeouts and one caught stealing.
Kender Villegas (former Palm Beach-Margarita) entered in the sixth and pitched two innings.  He allowed no hits or runs fro the hold (1).  (p-s:24-14)(g/f:2-2)

Eduardo Sanchez (former St. Louis-Aragua) entered in the sixth and pitched one inning.  He allowed no hits or runs, and struck two out.  (g/f:1-0)

Silfredo Garcia (Springfield-Margarita-Caribed) entered in the fourth and pitched two innings.  He allowed no hits or runs, and struck three out.  (g/f:2-1)

Hector Garcia (former Johnson City-La Guaira) entered late in the game at first base and batted sixth.  One walk at the plate.
Anderson Gerdel (former Palm Beach-La Guaira) entered in the eighth and pitched one inning.  He allowed one hit and no runs.  (g/f:1-1)

Leobaldo Pina (Peoria-Caracas) started at shortstop and batted third.  3-for-4 with two doubles, two RBIs, two runs, and one caught stealing.
Jesus Ustariz (former Johnson City-Caracas) started in left field and moved to third base, batting fourth.  1-for-2 with one run, two walks, and committed one error.

No Games Scheduled For Saturday Or Sunday

Aramis Garcia (former 2011 draft selection-Scottsdale) started at catcher and batted seventh.  2-for-3 with one double, three RBIs (one w/two-outs), one run, two passed ball, and allowed one stolen base.

Randy Arozarena (MiLB signing-Navojoa) started in centerfield and batted second.  1-for-5 with one run and one stolen base.

Efren Navarro (Memphis-Hermosillo) started at first base and batted third.  3-for-5 with one strikeout.