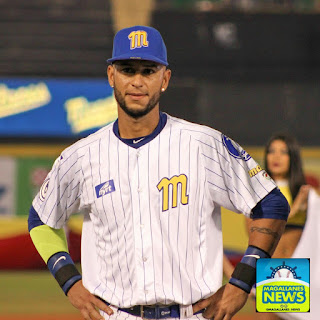 Eliezer Alfonzo (former Peoria-Margarita) started as designated hitter and batted fourth.  0-for-3 with one strikeout.

Ildemaro Vargas (former Palm Beach-Lara) started at shortstop and batted leadoff.  1-for-4 with one strikeout and assisted in two double plays.

Ronny Cedeno (former MLB signing-Magallanes) started at third base and batted sixth.  3-for-4 with two doubles, one two-out RBI, one run, and assisted in one double play.
Jose Martinez (former Springfield-Magallanes) started at second base and batted eighth.  1-for-4 with one RBI, one run, one strikeout, and assisted in one double play.

Dail Villanueva (former Peoria-Caracas) entered in the seventh and pitched to one batter.  He allowed no hits, one earned run, and one walk.  (p-s:7-3)

Cesar Valera (former Palm Beach-Caribes) started at shortstop and batted ninth.  2-for-4 with three RBIs, one run, one sac fly, one strikeout, and assisted in one double play.
David Oca (Johnson City-Caribes) entered in the sixth and pitched to two batters.  He allowed no hits or runs.  (p-s:6-4)(g/f:1-1)

Luis Garcia (former New Haven-Hermosillo) hit a solo home run to the tie the game as both Hermosillo and Mochis knotted at 1-1 in preseason play: Hermosillo Official Site

Juan Herrera (Palm Beach-Estrellas) was in the lineup as Estrellas beat Escogido 2-0 in preseason play: LigaDom
Posted by jrocke217 at 9:56 AM