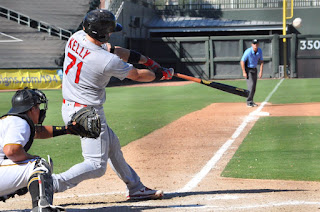 Cesar Valera (former Palm Beach-Caribes) started at shortstop and batted ninth.  0-for-4 with one RBI, two strikeouts, and one throwing error.
Roberto Canache (former Johnson City-Caribes) entered in the seventh and pitched two innings.  He allowed one hit, no runs, and struck two out.  (p-s:27-18)(g/f:1-2)

Carson Kelly (St. Louis-Glendale) started at catcher and batted fourth.  1-for-4 with one home run, three RBIs, one run, one walk, one stolen base, one strikeout, one throwing error, assisted in one double play, and allowed one stolen base.

Efren Navarro (Memphis-Hermosillo) started in left field and batted second.  2-for-5 with one RBI.

Randy Arozarena (MiLB signing-Navojoa) started in centerfield and batted second.  1-for-5 with one strikeout.

Eliezer Alvarez (Peoria-Escogido) entered late in the game at shortstop and batted ninth.  0-for-1 at the plate.

Eugenio Velez (former Memphis-Azucareros) started as designated hitter and batted second.  1-for-5 with one run.
Magneuris Sierra (Peoria-Azucareros) entered late in the game in left field and batted third.  1-for-2 with one run and one hit by pitch.