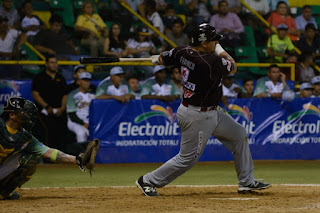 Ronny Cedeno (former MLB signing-Magallanes) started at third base and batted sixth.  0-for-4 with one walk, one strikeout, and grounded into one double play.
Jose Martinez (former Springfield-Magallanes) entered late in the game as a pinch hitter and batted ninth.  One intentional walk at the plate.

Cesar Valera (former Palm Beach-Caribes) started at shortstop and batted sixth.  0-for-4 with one strikeout and assisted in one double play.
David Oca (Johnson City-Caribes) entered in the sixth and pitched to one batter.  He allowed no hits or runs, and struck one out.  (p-s:3-3)

Silfredo Garcia (Springfield-Margarita-Caribes) entered in the sixth and pitched 2.1 innings.  He allowed no hits or runs, and struck three out. (g/f:1-3)(ir-s:1-0)

Jose Gonzalez (former Springfield-La Guaira) started at first base and batted leadoff.  2-for-3 with one RBI, one run, one walk, and one strikeout.

Harrison Bader (Springfield-Glendale) started in right field and batted leadoff.  0-for-2 with one run and one walk.
Carson Kelly (St. Louis-Glendale) started at catcher and batted fourth.  1-for-3 with one RBI and one sac fly.
Austin Gomber (Springfield-Glendale) started and pitched four innings.  He allowed four hits, three earned runs, one home run, one walk, threw one wild pitch, and struck four out.  (p-s:56-34)(g/f:3-3)
Ryan Sherriff (Memphis-Glendale) entered in the seventh and pitched to five batters.  He allowed one hit, one earned run, one walk, and struck one out for the losing decision (0-1).  (p-s:18-11)(g/f:1-0)

Irving Wilson (GCL-Culiacan) entered late in the game at catcher and batted fourth.  0-for-2 with one strikeout.
Iker Franco (former Springfield-Culiacan) started at catcher and moved to first base, batting ninth.  3-for-5 with three two-out RBIs, two runs, one strikeout, and allowed one stolen base.

Efren Navarro (Memphis-Hermosillo) started at first base and batted third.  1-for-5 and assisted in one double play.

Randy Arozarena (MiLB signing-Navojoa) started in centerfield and batted second.  1-for-4 with one RBI, one run, and one hit by pitch.

MLB may be looking to cut out the independant trainers in the Dominican Republic: El Caribe

Allen Cordoba (Johnson City) and Hector Salazar (former GCL) were selected to play for Panama in the U-23 games: TV Max
Posted by jrocke217 at 11:28 AM