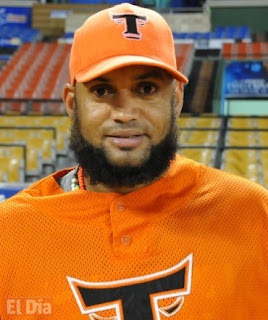 Breyvic Valera (Springfield-Margarita) started at second base and moved to left field, batting second.  1-for-4 with one strikeout, grounded into one double play, one fielding error, and assisted in one double play.
Eliezer Alfonzo (former Peoria-Margarita) started as designated hitter and batted seventh.  2-for-4 with one strikeout.
Justin Wright (Memphis-Margarita) entered in the seventh and pitched to one batter.  He allowed one hit and no runs.  (p-s:4-2)(ir-s:2-0)

Audry Perez (former St. Louis-Estrellas) started at catcher and batted eighth.  1-for-6 with one run.

Ruben Gotay (former Memphis-Mayaguez) started as designated hitter and batted fifth.  0-for-2 at the plate.
Randy Ruiz (former MiLB signing-Mayaguez) entered late in the game as designated hitter and batted fifth.  0-for-2 with one intentional walk.
Ivan Maldonado (former MiLB tryout-Mayaguez) started and pitched 4.1 innings.  He allowed seven hits, one earned run, two walks (one intentional), committed one pickoff error, and struck one out.  (g/f:6-4)

J.C. Romero (former St. Louis-Santurce) entered in the tenth and pitched to three batters.  He allowed no hits, one earned run, and two walks (one intentional) for the losing decision (0-1).  (g/f:1-0)

Francisco Rivera (former Palm Beach-San Andres) started in left field and batted third.  0-for-3 with one sacrifice, one stolen base, and one strikeout.

Jonathan Rivera (GCL-Metro) started in right field and batted fifth.  2-for-4 with one strikeout.