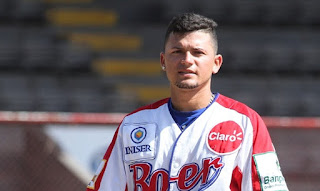 Jose Gonzalez (Springfield-La Guaira) started at catcher and batted ninth.  0-for-3 with one run, one hit by pitch, one strikeout, and allowed one stolen base.

Jose Martinez (former Springfield-Magallanes) entered late in the game at second base and batted second.  0-for-1 with one run.
Ronny Cedeno (former MLB signing-Magallanes) started at shortstop and batted eighth.  4-for-5 with one home run, three RBIs (one w/two-outs), two runs, and one stolen base.

Audry Perez (former St. Louis-Estrellas) started at catcher and batted eighth.  2-for-4 with one run, picked one base runner off, and allowed one stolen base.

Eugenio Velez (former Memphis-Azucareros) started in left field and batted third.  1-for-4 with one walk and one strikeout.

Fidencio Flores (former GCL-Granada) started and pitched 6.1 innings.  He allowed   He allowed one hit, no runs, six walks, and struck five out.  (g/f:3-10)

Hugo Castellanos (former Memphis-Acayucan) entered in the sixth and pitched one inning.  He allowed no hits or runs.  (g/f:2-0)