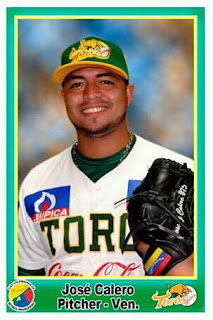 Ildemaro Vargas (former Palm Beach-Aragua) started at second base and batted ninth.  0-for-3 with one strikeout and grounded into one double play.
Jorge Rondon (former St. Louis-Aragua) entered in the seventh and pitched to four batters.  He allowed three hits, two runs (one earned), and struck one out.  (p-s:11-9)

Jose Gonzalez (Springfield free agent-La Guaira) started at catcher and batted ninth.  1-for-3 with one strikeout, one throwing error, and threw out one of three base runners.

Notes:
Sam Gaviglio (former Springfield-Estrellas) may miss the remainder of the playoffs with discomfort in his elbow: Estrellas Official Site

Luis Mateo (former Memphis-Caguas) entered late in the game at second base and batted ninth.  1-for-1 at the plate.

Francisco Rivera (former Palm Beach-San Andres) started left field and batted third.  1-for-3 with one run and one walk.