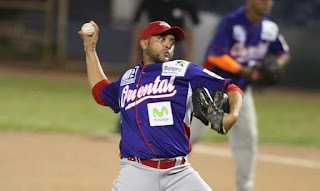 Jose Gonzalez (Springfield free agent-La Guaira) started at catcher and batted ninth.  0-for-3 with two strikeouts, grounded into one double play, two passed balls, and allowed one stolen base.

Roberto Canache (former Johnson City-Caribes) entered in the eighth and pitched to three batters.  He allowed one hit and no runs.  (p-s:11-8)(g/f:0-2)

Ronny Cedeno (former MLB signing-Magallanes) started at shortstop and batted eighth.  2-for-4 with two RBIs (one w/two-outs), one fielding error, and assisted in one double play.

Luis Mateo (former Memphis-Caguas) started a shortstop and batted second.  1-for-4 with one strikeout, grounded into one double play, and one fielding error.

Hugo Castellanos (former Memphis-Acayucan) entered in the sixth and pitched one inning.  He allowed no hits or runs.

Jonathan Rivera (GCL-Metro) started in right field and batted fifth.  1-for-5 with one RBI and three strikeouts.