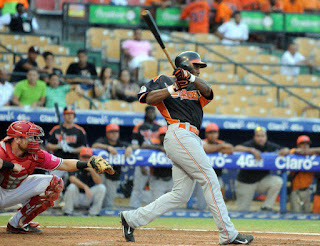 Pedro Rodriguez (former MiLB signing-Caribes) entered in the ninth and pitched one inning.  He allowed two hits and one earned run for the save (1).  (p-s:17-10)(g/f:2-0)

Jose Gonzalez (Springfield free agent-La Guaira) started at catcher and batted ninth.  0-for-2 with one RBI, one run, two sacrifices, and one strikeout.
Edubray Ramos (former VSL-La Guaira) entered in the seventh and pitched one inning.  He allowed one hit, no runs, and two walks for the hold (3).   (p-s:35-20)(g/f:2-1)

Luis Mateo (former Memphis-Caguas) started at shortstop and batted second.  0-for-3 with one walk, one strikeout, and assisted in one double play.

Jonathan Rivera (GCL-Metro) started in right field and batted fifth.  0-for-4 with one strikeout.

Notes:
Ozzie Canseco (former St. Louis) will be coaching this winter/spring: AWL Official Site
Posted by jrocke217 at 8:41 AM