Cardinals Winter League Notebook 1-12-16: Luis Mateo Singles, Doubles, & Drives In One Run; Pedro Rodriguez Strikes Out One Over One Hitless/Scoreless Inning For The Save; Eliezer Alfonzo Singles Twice 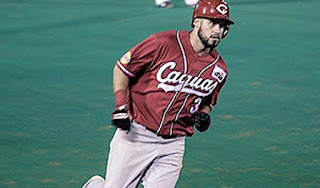 Pedro Rodriguez (former MiLB signing-Caribes) entered in the ninth and pitched one inning.  He allowed no hits or runs, and struck one out for the save (3).  (p-s:10-6)

Iker Franco (former Springfield-Obregon) entered late in game as pinch hitter and batted eighth.  0-for-1 at the plate.

Eugenio Velez (former Memphis-Azucareros) started in left field and batted third.  0-for-5 with one strikeout and one fielding error.

Luis Mateo (former Memphis-Caguas) started at shortstop and batted second.  2-for-4 with one double, one RBI, one run, and one grounded into one double play.

Francisco Rivera (former Palm Beach-San Andres) entered late in the game in left field and batted seventh.  0-for-1 at the plate.
Omar Javier (former Johnson City-San Andres) seventh and pitched one inning.  He allowed one hit, no runs, one walk, and hit one batter.

Jonathan Rivera (GCL-Metro) started in right field and batted fifth.  1-for-4 at the plate.

Notes:
Nicaragua released some information on events leading up to the opening game: El Nuevo Diario
Posted by jrocke217 at 10:45 AM