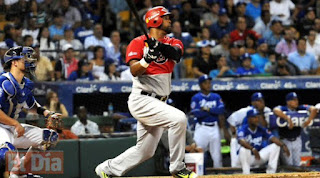 Jose Martinez (former Springfield-Magallanes) started at shortstop and batted eighth.  2-for-3 with one two-out RBI, one walk, and assisted in one double play.

Notes:
Jose Martinez (former Springfield-Magallanes) could be added to the Aragua roster for the Caribbean Series: El Universal

Beau Riportella (former Quad Cities-Midwest) started in centerfield and batted fourth.  1-for-2 with one RBI, three runs, two walks, one stolen base, and one strikeout.

Ronald Ramirez (former Palm Beach-Barranquilla) started at shortstop and batted eighth.  1-for-3 with one run and one strikeout.

Hugo Castellanos (former Memphis-Acayucan) entered in the eighth and pitched to two batters.  He allowed no hits or runs, and one walk.  (g/f:1-0)(ir-s:1-1)

Notes:
Tony Pena (former St. Louis) was outstanding as both a player and manager: Listin Diario

Notes:
Wayne Lundgren (former Palm Beach-Sydney) is listed on the roster for Australia: ABL Official Site
Posted by jrocke217 at 10:50 AM