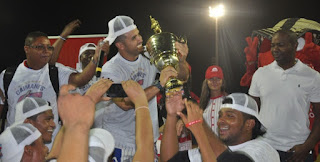 Jose Martinez (former Springfield-Magallanes) started at shortstop and batted eighth.  1-for-4 with one double, two runs, one hit by pitch, and assisted in one double play.

No Games Scheduled Until Tuesday

No Games Scheduled Until Tuesday

Beau Riportella (former Quad Cities-Midwest) started in centerfield and batted seventh.  0-for-1 with three runs, two walks, and one stolen base.

Luis Urueta (former Palm Beach-Barranquilla MGR) is proud of winning his second title in the LCBP but first with the team that he played for: El Heraldo and El Universal
Posted by jrocke217 at 10:19 AM