Cardinals Winter League Notebook 1-18-16: Jeremy Hefner Strikes Out One & Allows One Run Over Five Innings; Audry Perez Singles Twice, Doubles, & Drives In One Run; Pedro Rodriguez Strikes Out Two Of Three Batters For The Save 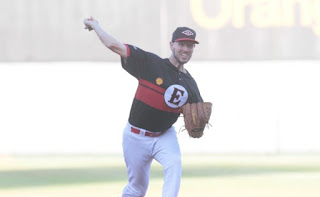 Jose Gonzalez (Springfield free agent-La Guaira) started at catcher and batted ninth.  0-for-1 with one run, one sacrifice, one hit by pitch, one throwing error, and threw out one base runner.

Pedro Rodriguez (former MiLB signing-Caribes) entered in the ninth and pitched one inning.  He allowed no hits or runs, and struck two out for the save (5).  (p-s:16-9)(g/f:0-1)

Eugenio Velez (former Memphis-Azucareros) started in left field and batted third.  2-for-5 with one double and one run.

Jeremy Hefner (MiLB signing-Escogido) started and pitched five innings.  He allowed three hits, one earned run, one walk, and struck one out.  (g/f:7-5)

Luis Mateo (former Memphis-Caguas) started at shortstop and batted second.  2-for-3 with one run and one walk.

Hugo Castellanos (former Memphis-Acayucan) entered in the seventh and pitched two-thirds of an inning.  He allowed no hits or runs.