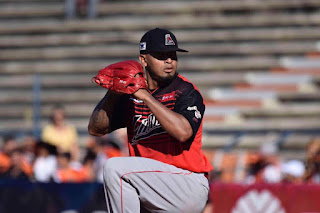 Wilfredo Tovar (Memphis-Caracas) started at second bas and batted second.  0-for-3 with one sacrifice and one strikeout.
Miguel Socolovich (former St. Louis-Caracas) entered in the eighth and pitched one inning.  He allowed no hits or runs, and struck three out for the winning decision (1-1).  (p-s:18-12)(g/f:0-1)

Donovan Solano (former Memphis-Licey) started at third base and batted sixth.  1-for-4 with one strikeout.

Alberto Rosario (former St. Louis-Cibaenas) entered late in the game at catcher and batted ninth.  0-for-1 at the plate.