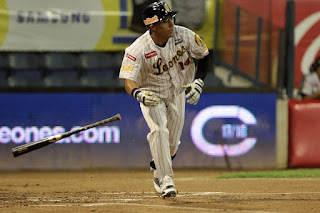 Randy Arozarena (Springfield-Navojoa) started in left field and batted second.  0-for-4 with one strikeout.

Niko Vasquez (former Springfield-Mazatlan) started at shortstop and batted eighth.  0-for-5 with two strikeouts and assisted in one double play.

Jermaine Curtis (former St. Louis-Zulia) started at third base and batted seventh.  2-for-4 with one two-out RBI, one walk, and one strikeout.

Rafael Ortega (former Memphis-Caribes) started in centerfield and batted leadoff.  0-for-5 at the plate.

Wilfredo Tovar (Memphis-Caracas) started at second base and batted second.  4-for-5 with one double, one home run, two RBIs (one w/two-outs), three runs, and assisted in two double plays.
Miguel Socolovich (former St. Louis-Caracas) entered in the ninth and pitched one inning.  He allowed one hit and one earned run.  (p-s:16-12)(g/f:3-0)

Audry Perez (former St. Louis-Escogido) started at catcher and batted ninth.  1-for-3 with one two-out RBI and allowed one stolen base.

Donovan Solano (former Memphis-Licey) started at third base and batted fourth.  0-for-4 at the plate.

Notes:
Ozzie Virgil (former contract purchase) has his house broken into while he traveled to the U.S.: El Caribe