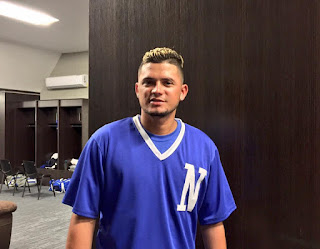 Notes:
Anthony Garcia (former Memphis-Carolina) is unsure if he will travel with Caguas to Caribbean Series: El Nuevo Dia

Francisco Rivera (former Palm Beach-Acayucan) started as designated hitter and batted fifth.  1-for-5 at the plate.

Edgard Montiel (former DSL-Chinandega) started as designated hitter and batted sixth.  0-for-5 with one strikeout.
Fidencio Flores (former GCL-Chinandega) entered in the seventh and pitched two innings.  He allowed no hits or runs, one walk, and struck one out.  (g/f:3-2)

No Games Scheduled For Monday
Posted by jrocke217 at 10:05 AM