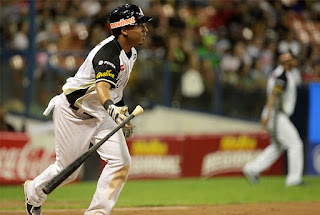 Notes:
Ramon Delgado (former Memphis-Jalisco) missed the season with Jalisco after being hit in the eye by a ball: Jalisco Official Twitter

Wilfredo Tovar (Memphis-Caracas) started at second base and batted second.  2-for-4 with one double, two RBIs, and one run.
Leobaldo Pina (Palm Beach-Caracas) started at third base and batted eighth.  0-for-3 with one run and one walk.
Miguel Socolovich (former St. Louis-Caracas) entered in the eighth and pitched to two batters.  He allowed no hits or runs, and struck one out.  (p-s:7-4)(g/f:1-0)(ir-s:1-0)

Rafael Ortega (former Memphis-Caribes) started in centerfield and batted leaodff.  1-for-4 with one home run, one RBI, one run, and one strikeout.

Notes:
Cocle has declined to participate in the Latin American Series due to wages and runner-up Urraca will take their place: TV Max Deportes

Anthony Garcia (former Memphis-Carolina) started in right field and batted fourth.  1-for-4 with one stolen base and one caught stealing.
Juan Caballero (former Johnson City-Carolina) entered in the seventh and pitched one inning.  He allowed one hit, one earned run, one home run, one walk, and struck one out.  (g/f:1-1)

Ruben Gotay (former Memphis-Caguas) started at first base and batted sixth.  0-for-3 with one RBI and one sac fly.
Robby Rowland (former Springfield-Caguas) entered in the eighth and pitched one inning.  He allowed one hit and no runs for the hold (3).  (g/f:2-0)