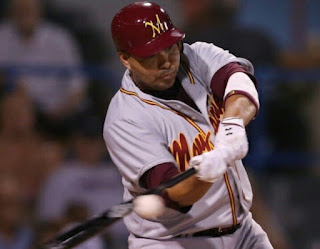 Notes:
Tunas and Granma will face-off in the championship: Diario de Cuba

Randy Arozarena (Springfield-Navojoa) started in left field and batted second.  1-for-4 with one double, one RBI, one run, and one strikeout.

Audry Perez (former St. Louis-Escogido) started at catcher and batted seventh.  1-for-2 with one RBI, one walk, one sac fly, and allowed one stolen base.

Anthony Garcia (former Memphis-Carolina) started in right field and batted third.  0-for-3 with one walk.

Randy Ruiz (former MiLB signing-Mayaguez) started as designated hitter and batted fourth.  2-or-4 with one home run, two two-out RBIs, and one run.
Tyler Herron (former Springfield-Mayaguez) entered in the seventh an pitched 1.1 innings.  He allowed no hits or runs, and struck one out.  (g/f:2-0)(ir-s:1-0)

Ruben Gotay (former Memphis-Caguas) started at first base and batted sixth.  1-for-4 with one double and one RBI.
Robby Rowland (former Springfield-Caguas) entered in the eighth and pitched one inning.  He allowed no hits or runs, and struck one out for the hold (4).  (g/f:2-0)