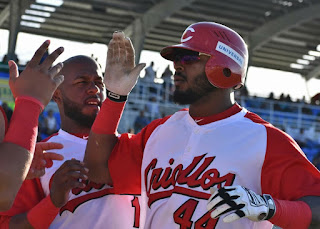 Randy Arozarena (Springfield-Navojoa) started in left field and batted leadoff.  1-for-4 with one double.

Rafael Ortega (former Memphis-Caribes) started in centerfield and batted leadoff.  2-for-4 with one double, one run, and one walk.

Rangel Ravelo (Memphis-Lara) is writing his own history in the LVBP: Lider

Notes:
Donovan Solano (former Memphis-Licey) posted an update on his status after being hit in the face by a pitch: Licey Official Twitter

Anthony Garcia (former Memphis-Caguas) started in right field and batted third.  2-for-4 with one double, one home run, one RBI, and one run.
Robby Rowland (former Springfield-Caguas) entered in the eighth and pitched one inning.  He allowed no hits or runs, and struck one out for the hold (1).  (g/f:1-1)

Notes:
Porfirio Lopez (Trios-Rivieres free agent-Sincelejo) demand $500 to pitch the championship finale but the team did not give in: El Universal