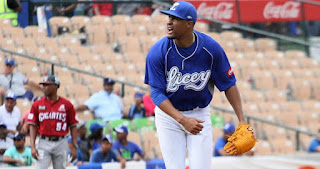 Rafael Ortega (former Memphis-Caribes) started in centerfield and batted leadoff.  3-for-5 with one double, one run, and one caught stealing/pickoff.

Wilfredo Tovar (Memphis-Caracas) started at second base and batted second.  0-for-4 with one strikeout and assisted in two double plays.
Miguel Socolovich (former St. Louis-Caracas) entered in the eighth and pitched one inning.  He allowed one hit and no runs.  (p-s:8-7)(g/f:1-1)

Donovan Solano (former Memphis-Licey) started at third base and moved to second, batting second.  1-for-5 with one home run, one RBI, one run, one strikeout, and assisted in one double play.
Pedro Echemendia (Memphis-Licey) started and pitched five innings.  He allowed five hits, one earned run, two walks, and struck four out for the wining decision (3-0).  (g/f:85-53)(g/f:5-3)

Audry Perez (former St. Louis-Escogido) started at catcher and batted eighth.  1-for-3 with one walk and allowed two stolen bases.

No Championship Game Scheduled For Saturday

Ruben Gotay (former Memphis-Caguas) started at first base and batted sixth.  1-for-4 with one strikeout, grounded into one double play, and assisted in two double plays.
Ivan Maldonado (former MiLB tryout-Caguas) started and pitched 5.2 innings.  He allowed four hits, one earned run, one home run, three walks, and struck three out for the winning decision (2-0).  (g/f:4-5)
Robby Rowland (former Springfield-Caguas) entered in the eighth and pitched one inning.  He allowed no hits or runs, and two walks for the hold (2).  (g/f:1-1)

Yariel Gonalez (State College-Mayaguez) started as designated hitter and batted seventh.  2-for-4 with one RBI, one run, and one walk.