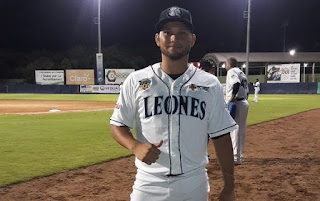 Randy Arozarena (Springfield-Navojoa) started in left field and batted leadoff.  0-for-5 with one strikeout and one outfield assist.

Rafael Ortega (former Memphis-Caribes) started in centerfield and batted leadoff.  0-for-4 at the plate.
Cesar Valera (former Palm Beach-Caribes) entered late in the game at shortstop and batted ninth.  0-for-1 at the plate.

Notes:
Ildemaro Vargas (former Springfield-Lara) hopes to play the entire championship but could be pulled by Arizona.  Mark Whiten (former St. Louis-Lara) is one of three Lara players in history to hit a grand slam in the championship round: LVBP Official Site

Donovan Solano (former Memphis-Licey) started at third base and batted second.  0-for-4 with one strikeout.

Anthony Garcia (former Memphis-Carolina) started in right field and batted fourth.  1-for-4 with one double and one two-out RBI.

Ricardo Bautista (State College-Caguas) started in right field and batted sixth.  0-for-3 with one run, one intentional walk, and one strikeout.
Robby Rowland (former Springfield-Caguas) entered in the ninth and pitched one inning.  He allowed no hits or runs, and struck two out.  (g/f:0-1)

Notes:
Curt Smith (former Springfield-Chinandega) was not included on the Chinandega roster: NicaBeis Twitter
Posted by jrocke217 at 10:15 AM