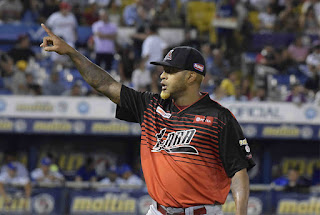 Granma beat Las Tunas 4-2 to even the series at two games a piece: Baseball de Cuba

Randy Arozarena (Springfield-Navojoa) started in left field and batted leadoff.  0-for-4 with one run, one walk, and two strikeouts.

Rafael Ortega (former Memphis-Caribes) started in centerfield and batted leadoff.  1-for-4 with one walk and one strikeout.

Donovan Solano (former Memphis-Licey) started at third base and batted seventh.  0-for-3 with one hit by pitch, one strikeout, and assisted in one double play.

Notes:
Albert Pujols (former St. Louis-Cibao) was on hand for the first game of the championship: El Nuevo Diario

Donovan Solano (former Memphis-Licey) left the game early after being hit in the face by a pitch: Enrique Rojas Twitter