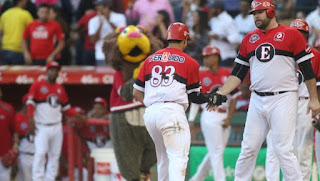 Kender Villegas (former Palm Beach-Margarita) entered in the sixth and pitched to four batters.  He allowed one hit, one unearned run, and one walk for the blown save (1).  (p-s:13-6)(g/f:1-0)

Ildemaro Vargas (former Palm Beach-Lara) started at second base and batted leadoff.  0-for-4 with one walk, one strikeout, and assisted in two double plays.

Donovan Solano (former Memphis-Licey) started at third base and batted seventh.  0-for-4 at the plate.

Tommy Pham (St. Louis-Escogido) started in centerfield and batted fourth.  1-for-4 with one run and one walk.

Brayan Pena (St. Louis free agent-Cibaenas) entered late in the game as a pinch hitter and batted fifth.  1-for-1 at the plate.
Hector Luna (former St. Louis-Cibaenas) started at first base and batted sixth.  1-for-2 with one two-out RBI, one run, two walks, and one strikeout.
Angel Castro (former Memphis-Cibaenas) started and pitched 2.1 innings.  He allowed seven hits, five runs (four earned), committed one fielding error, and struck one out for the losing decision (1-1).  (g/f:4-1)

Jonathan Rodriguez (former Memphis-Mayaguez) started at first base and batted seventh.  0-for-4 with four strikeouts and assisted in two double plays.

Anthony Garcia (Memphis-Carolina) started in right field and batted fourth.  0-for-3 with one walk and one strikeout.

Notes:
Santurce won the series four games to one over Carolina.