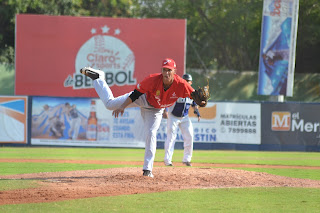 Eugenio Velez (former Memphis-Mochis) started as designated hitter and batted seventh.  1-for-3 with one run, one walk, one stolen base, and grounded into one double play.

Notes:
Mexicali won the series over Mochis four games to two and will head to the Caribbean Series.

Donovan Solano (former Memphis-Licey) started at second base and batted second.  2-for-5 with one RBI, grounded into one double play, and assisted in two double plays.

Brayan Pena (St. Louis free agent-Cibaenas) entered late in the game as a pinch hitter and batted ninth.  0-for-1 at the plate.
Angel Castro (former Memphis-Cibaenas) started and pitched to four batters.  He allowed two hits, no runs, and one walk.  (g/f:1-0)

Notes:
Licey won the series over Cibaenas five games to four and will head to the Caribbean Series.

The LIDOM had a little trouble paying the players in the playoffs: El Caribe

Cibaenas fans upset over the loss set fire to a tree near city hall: El Caribe

Malik Collymore (former Johnson City-Sydney) started in left field and batted second.  1-for-3 with one double, one walk, one stolen base, and one caught stealing.

Francisco Rivera (former Palm Beach-Xalapa) started at catcher and batted third.  1-for-4 at the plate.

Rumors are swirling that the Puerto Rican League may not operate for the 2017-18 season and Ramon Vazquez (former Memphis-Santurce MGR) will look for opportunities elsewhere: Primera Hora

Notes:
The Colombian team will begin training tomorrow to create the 28-man roster from 50 players with Neder Horta (former St. Louis scout) as manager and Luis Urueta (former Palm Beach) as assistant: El Meridiano
Posted by jrocke217 at 10:45 AM