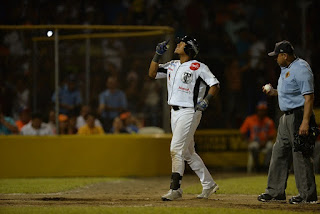 Ronny Cedeno (former MLB signing-Zulia) started at third base and batted sixth.  0-for-4  with one strikeout.

Geudy Guerra (former VSL-La Guaira) entered in the seventh and pitched to four batters.  He allowed one hit, one earned run, two walks (one intentional), and threw one wild pitch.  (p-s:15-5)(ir-s:2-2)

Ildemaro Vargas (former Palm Beach-Lara) started at second base and batted leadoff.  1-for-4 with one walk, one caught stealing, and assisted in one double play.

Notes:
Ildemaro Vargas (former Palm Beach-Lara) has struggled since the beginning of the New Year and will not be permitted to play beyond January 16, 2017 per Arizona: Meridiano

Donovan Solano (former Memphis-Licey) started at third base and batted eighth.  1-for-2 with one hit by pitch and one strikeout.

Brayan Pena (St. Louis free agent-Cibaenas) started at first base and batted fifth.  0-for-3 with one strikeout and assisted in one double play.

Malik Collymore (former Johnson City-Sydney) started in left field and batted leadoff.  0-for-4 with one run, one walk, one stolen base, and two strikeouts.

No Games Scheduled For Monday
Posted by jrocke217 at 9:58 AM