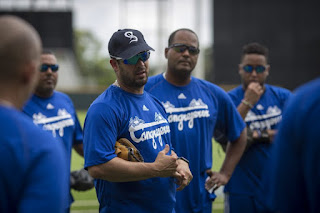 Eugenio Velez (former Memphis-Mochis) started in left field and batted leadoff.  1-for-4 with one triple, one two-out RBI, and one strikeout.

Efren Navarro (former Memphis-Hermosillo) started at first base and batted fourth.  0-for-7 and assisted in one double play.

Notes:
Mochis and Mexicali both won their respective series four games to three.

Donovan Solano (former Memphis-Licey) started at second base and batted second.  1-for-3 with one run, one walk, and assisted in one double play.

Hector Luna (former St. Louis-Cibaenas) started as designated hitter and batted seventh.  0-for-2 with one strikeout.

J.C. Romero (former St. Louis-Santurce) entered in the seventh and pitched to two batters.  He allowed no hits or runs, and struck two out for the hold (3).

Malik Collymore (former Johnson City-Sydney) started in left field and batted leadoff.  2-for-4 with one RBI, one stolen base, and one strikeout.