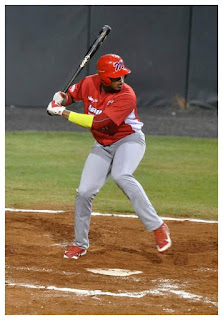 Granma, with the help of Alfredo Despaigne and Guillermo Aviles, won the championship over Avila and will advance to the 2017 Caribbean Series: Baseball de Cuba

Eugenio Velez (former Memphis-Mochis) started in left field and batted leadoff.  1-for-4 with one strikeout.

Brayan Pena (St. Louis free agent-Cibaenas) entered late in the game at catcher and batted ninth.  1-for-2 with one two-out RBI and one run.

Donovan Solano (former Memphis-Licey) started at second base and batted second.  3-for-5 with one double, one two-out RBI, one run, one strikeout, and assisted in one double play.

Randy Ruiz (former MiLB signing-Caguas) started as designated hitter and batted fourth.  1-for-4 with one double, one RBI, and one strikeout.
Ruben Gotay (former Memphis-Caguas) started at first base and batted fifth.  1-for-4 with one RBI, one strikeout, and assisted in one double play.
Justin Wright (Memphis free agent-Caguas) entered in the fourth and pitched to one batter.  He allowed one hit and no runs.  (ir-s:2-0)

J.C. Romero (former St. Louis-Santurce) entered in the eighth and pitched one inning.  He allowed no hits or runs, one walk, and picked one runner off.  (g/f:2-0)

Notes:
Randy Ruiz (former MiLB signing-Caguas) brought his son, R.J., out before the game to play in the field: Primera Hora

Notes:
Will be a three-day tournament between the champions of the NPB, KBO, and CPBL: Yonhap News Agency
Posted by jrocke217 at 9:58 AM